And I am not carrying him around the house in a sling, doing my poor crippled back in! And, for the first time in months, he fell asleep in the cot, without me having to cuddle him to sleep. I did sit in a chair beside the cot, and keep a hand on his chest as he fell asleep, but I was able to read a book at the same time.

It may not sound like much, but to me it is a minor miracle. Over the past few months he has been getting more and more dependant on me putting him to sleep, rather than him falling asleep on his own, and I was feeling more and more despair each day at the prospect of getting him to sleep. Last Tuesday, I decided that I was going to go back to the Tresillian method, and just wait out the inevitable pain.

Obviously, last week got the better of me, and I was gibbering mess by Wednesday afternoon. I gave up, and spent the last few days trying the “whatever it takes to get through the day” method. I hear this method is very popular with full time parents, but can lead to some long term issues!

It’s now an hour later, and he is still asleep! This must be the longest day sleep he has had in ages – barring those times when I have either slept with him, or just sat with him in the sling until he woke up.

And I have used my time constructively of course – I had a civilised lunch (with actual fresh vegetables – beats eating out of a can!), caught up on some email, chatted on the phone with a friend, and written a blog post.

I’ll clean up the kitchen during his next nap 😉

Update: 8pm and he is asleep again after waking at 5.30pm for a meal. Again in his cot, with me sitting by his side. I did have to prop him up on a triangular pillow, which isn’t safe for overnight, so I’ll wait till he’s a little deeper asleep and take the pillow away.

It’s very hard work trying to lift such a huge head off those tiny little shoulders!

Inigo was much better yesterday (no spewing after expressed breast milk that had been in the freezer, but spewed after I fed him). Mum and dad took him for a few hours while I went to the RTA and Medicare to get stuff replaced. He slept well all night, and today it’s been more of the same. Sleeps well in the sling, but spews if I try to lay him in the cot.

Or the spewing is psychosomatic? He’s punishing me for putting him in the cot?

Anyway, I refuse to let it get me down (for too long), and I refuse to be the mother that obsesses over every little thing the offspring does. I am keeping a food diary, and will attempt to track his good and bad days, and I’ll blog about it when I need to vent. But he isn’t dying, he isn’t losing (too much) weight, and we will get through this.

Thanks for the support and suggestions, I am OK, and Inigo will be too.

It is not possible to know all the answers. You can think that you have a clue, and then something happens to prove that instead of being a prodigy, you are instead in need of remedial help.

I “think” that the Losec has been helping. Inigo is screaming less, but still doing a good bit of crying. He has developed a bizarre addiction to infacol, and he stops crying instantly when I give it to him. I have a theory that the mint flavour reminds him of the Mylanta that used to make him feel better when her was refluxing, but of course, I could be insane (in fact, that is becoming more and more likely!).

Yesterday, I decided that only sleeping when he is being held won’t work for me long term, so I tried to get him to sleep in his cot during the day. I spent a long time settling, finally got him to sleep, only to have him wake up screaming.

I picked him up, he burped, and I tried to resettle him. And then he cried again, then spewed, then cried, then burped, then spewed, and then it was time for another feed. He hadn’t slept much since the last fed, and was really tired, so after burping him, I put him down again to sleep. Poor baby needed another burp, and had another spew. And again. The third or fourth time he spewed, it went all over my shoulder, down my back, down my jeans and splattered on the floor. A huge amount from little guy who had already had a couple of small chucks. On closer inspection, the spew was full of mucous.

He then went to sleep for a while, was unsettled for a bit longer, then had his last feed of the day, and eventually went to bed for the night. He slept well last night, but today has been a repeat of yesterday afternoon. While waiting for the GP today, he spewed down my jeans and onto the floor, via a puddle in my right shoe.

The GP thinks he is fine – it’s just a reaction to “something” I ate.

So now I suppose I have to research food intolerance and breastfeeding, and perhaps try an elimination diet. I’m not keen on the elimination diet idea, because it’s very likely to mess with my fragile mental health.

When is this supposed to start being fun exactly?

Somebody who I think is very polite just pissed off about 150 people by politely posting an opinion on a parenting message board. I hate the name “Hunter” too, and I’d feel physically ill if I meet a poor defenceless baby that was saddled with the name. But I was surprised at the venom directed at this very polite person.

But it is funny 😉

A strange man asking to photograph your baby in a shop? Or finding your wallet isn’t in your bag a little while later?

I hate the idea of a stranger going through my stuff. There wasn’t any money in the wallet, but it’s a hassle to get a new drivers licence, medicare card, credit cards, etc… And a possibly irreplaceable photograph of my grandmother.

But a wierdo hanging around the baby while my back was turned really freaks me out. Whether he took my wallet or not, it was a really horrible feeling, and I am reminded that my sunny desire to see the world as a happy place isn’t always realistic.

Of course, Inigo was looking spectacular yesterday as we cruised Broadway shops (Miriam and I took the babies to a French film in the morning). He was wearing a new Jam Tot’s Berry Plush nappy, with a jaguar print. And no shirt, because it was hot. Like a mini Johnny Weisemuller. Or “George of the Jungle” for the younger folk. The boy had loads of admirers, in one shop it got quite embarrassing. Before my wallet got pinched, I bought him a classy t-shirt that says “Chicks Dig Me”. 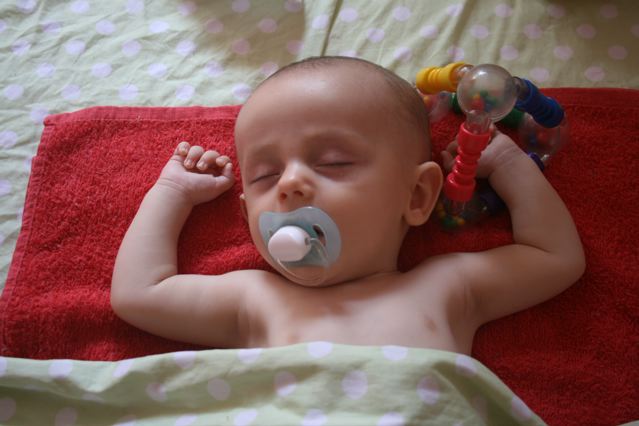 Inigo at 11am last Tuesday, after screaming and puking from 9am till 11. We are both very relieved at this point!

…that it’s about time I stopped being so lame, and learn how to crochet properly. I like crochet, not so much for garments, but for accessories, and for edging knitted pieces, but my crochet skills are pretty poor.

And this morning, I got “Crochet Blocks in a Box” by Luise Roberts. I had entered a Yarn Magazine competition ages ago, and apparently I won!

Thanks Yarn – looking forward to the next issue, and continuing a beautiful friendship.

That’s how much weight Inigo has put on in the last two weeks. Which Lyn (the baby health nurse) and I were really worried about, until we plotted his weight on an expanded chart, and it seems that his weight is following the curve for the 10th percentile. His height (length) is spot on the 50th percentile. So while he is a skinny little thing, he is growing, and following a normal pattern.

The good news is, he’s been on the Losec for about 10 days, and he is doing really well. His crying episodes now seem to be related to tiredness (and sometimes crankyness) rather than intestinal torment. He’s still crying, but it’s gone down to what might be considered normal in a baby his age.

I realised last week that I was living my worst nightmare – before he was born, my worst fear was that I would have a baby that cried inconsolably, and until recently, that is what I was living with. And although it has been horrible, I have coped much better than I thought I would. And as he gets older, and happier and calmer, he is much more fun to be around. He is laughing more readily now, and the cuteness factor is off the scale.

And one up side of the slow weight gain? When it gets cold enough to wear his woolies, some of them will still fit!

I’ve basically recorded and uploaded this so that I have a record that I can show to the next doctor I see. I have a feeling that actual video of what I have been using words to explain might help the doctors to take me seriously.

Inigo screams and screams, I hate giving him drugs, but I hate seeing him in pain even more. So if there is a drug I can give him that will prevent the pain, rather than just covering the symptoms, I think I should pursue it. Giving him Mylanta after every feed isn’t an answer in my book.

BTW, if I’ve seemed a little tense lately, and burst into tears at the drop of a hat, this goes a long way to explaining it.

We’re off to Pearl Beach to introduce Inigo to the sea, so we’ll be missing this historic night. But I do think it’s important to acknowledge the ’78ers.

After 30 years we’ve come a long way – but not far enough. Thanks to those that were brave enough to make a stand 30 years ago, and here’s hoping it isn’t another 30 years before we have what they were marching for. TRUE equality.