This made me retch. And not in a good way.

Go read it – but make sure your sound is turned off.

I’ll leave it to those more eloquent than me to count the ways this attitude makes me want to pluck out my eyeballs and curse.

This morning we picked up our new baby carrier, and used it a few times to great effect. Including a trip to Bronte Beach for a special birthday picnic! 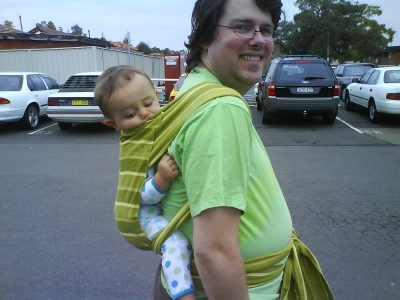 Twenty years ago today I was working in my second ever job, as a tape operator at Channel 9 Sydney. Part of my job was to record satellite feeds from overseas, usually sporting events or breaking news.

I don’t remember what time it was, but I remember that I was distracted just after the feed started, so it took a while before I was able to get back to the machine and quality check the signal, and what I saw was the stuff of nightmares. The cameraman (I’m guessing it was a man, it was the eighties!) had time to walk from the vehicle into the centre of the disaster area, and was surrounded by the smouldering wreckage of a few hundred lives. I can’t think what he thought he was recording, or why, but I saw panoramas and close-ups of things that nobody should have to look at.

And I couldn’t look away. mostly because I was in shock, but also because I was young, and I didn’t yet have the strength to stand up for myself. It was my job, so I did it.

And I didn’t think it affected me. I didn’t complain about the nightmares, I blithely carried on, and ignored my involuntary flinches when I saw an aeroplane overhead.

Until the next time I got on a plane, I thought I was fine. I felt a vague sense of unease as I stowed my hand luggage in the overhead compartment, I was a little shaky as I fastened my seatbelt. But when the plane began to move I clutched the arm of the man in the seat next to me, and clung on for dear life until the plane had levelled off. Only then was I able to explain, and apologise (profusely), that I had never been afraid of flying before, that I had flown regularly since I was a little kid, that I had sometimes thrown up, but never been so terrified that I molested complete strangers.

So now I try to fly with friends and loved ones, people who hold my hand and understand that you can’t control that sort of blind terror, and that I have my reasons.

Hard to believe that it was two decades ago, and I’ve never looked at a plane the same way since.

The job went around the clock, and the shifts were from midnight till 7am, 7am till 3.30pm, 3.30pm till midnight. The work room was a long corridor with VHS, Beta, 3/4″ and 2″ tape machines lining the walls. There were over 50 monitors, and I had to know what was going on on each of them. To this day I like to read a book with the radio and the TV on at the same time.

We recorded what was going to air so that there was a constant record – sometimes we were asked to prove that a certain commercial went to air at a certain time. Sometimes we would be asked to compile snippets of library tape for an editor – once I spent an entire shift dubbing truck smashes from the Hume Highway. Of course, this was footage taken at the scene, raw, unedited for broadcast, so we got all the gory detail. Ask me why I hate driving the Hume! We would record live programming, often so that the presenters could review the show after it aired. Every night we recorded a few copies of “Coast to Coast with Graham Kennedy”, and usually I would drop the tape at reception for him. If it was a busy night, and I couldn’t get to reception, his makeup artist would pick it up. And often, the co-host, John Mangos would collect it. Twenty years later, I still remember how alarmingly smooth and charming he is. If you ever get a chance to chat with him, you’ll know what I mean.

During down time I would wander down to the studios and help heave sets around. I made friends with the studio crew from MTV and used to go out partying with them after the show. It was Sydney in the ’80’s, but it felt like New York …

Don’t you think every kid should have such an appreciative audience for their big milestones?

Inigo is still enthusiastically cruising furniture, but not standing alone for more than a few seconds. I think cousin Ella will be way ahead of him for quite a while 🙂 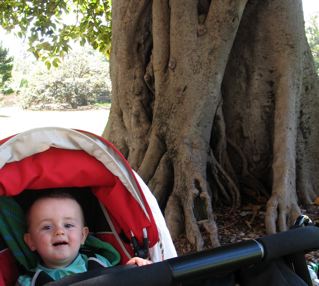 Inigo Nettle gave his first interview under the tree at the back of State Parliament.
He had a pointed question for Mr Rudd: “What will the climate be like when I am your age?”

THIS IS THE ONLY WAY I COULD CONTACT YOU,MY TEAMS HAS BEEN PAID TO
ASSASSINATE YOU, I NEVER KNEW THE TARGET WAS YOU TILL AFTER THE
PAYMENT AND THE DESCRIPTIONS,I HAVE NOTHING AGAINST YOU BECAUSE YOU
ARE A GOOD PERSON ACCORDING TO WHAT I SAW DURING OUR INVESTIGATION, DO NOT BOTHER KNOWING WHO I AM OR WHY AM HELPING YOU FOR I WILL LET YOU KNOW AT THE RIGHT TIME, BUT YOU CAN CALL ME MAMOOD ALI.

ALL YOU HAVE TO DO IS FOLLOW MY INSTRUCTIONS AND KEEP THIS TO YOURSELF OR ELSE HE WILL FIND OUT THAT I HAVE BETRAYED HIM AND MIGHT FIND AN ALTERNATIVE MEANS TO GET AT YOU. I WILL PROVIDE YOU WITH HIS IDENTITY AND OTHER INFORMATION YOU NEED TO GET HIM ARRESTED BUT BEFORE THEN, YOU ARE REQUIRED TO MAKE A MANDATORY PAYMENT WHICH YOU HAVE TO TELL ME WHAT YOU CAN PAY FOR COMMITMENT THAT YOU ARE NOT GOING TO BETRAY ME AND I NEED IT ALSO TO SETTLE THE BOYS WITH IT SO THAT THEY CAN STAY OFF YOUR BACK,AFTER WHICH I WILL TAKE UP THE ISSUE PERSONALLY FROM THERE.

THE TEAM ALWAYS TAPE-RECORD THE CONTRACT CONVERSATION WE HAVE WITH ANY EMPLOYER IN CASE IF HE TRIES TO BETRAY US IN FUTURE ,RIGHT NOW AM TRYING TO MAKE A COPY OF THE VIDEO TAPE THAT CONTAINS OUR DISCUSSION WITH HIM SO I CAN SEND IT TO YOU AS AN EVIDENCE FOR YOU TO NAIL HIM.

ALWAYS KNOW THAT AM BY YOUR SIDE UNLESS YOU GIVE ME A REASON NOT TO,AM DOING YOU THESE FAVOUR BECAUSE OF THE KIND PERSON YOU ARE.

WORD OF ADVICE,ALWAYS ENDEVOUR TO BE GOOD TO PEOPLE.
MIND YOU THIS IS NOT A MATTER FOR THE POLICE,SO DO NOT INFORM THEM
BECAUSE IF YOU DO,I WILL BACK OFF AND YOU WILL NEVER FIND OUT WHOM
YOUR TERROR REALLY IS,THEN YOU WILL ALWAYS LIVE IN FEAR OF THE
UNKNOWN.

GET BACK TO ME ASAP IF YOU REALLY NEED MY HELP.
MIND YOU,TIME IS OF ESSENCE
GOOD LUCK. 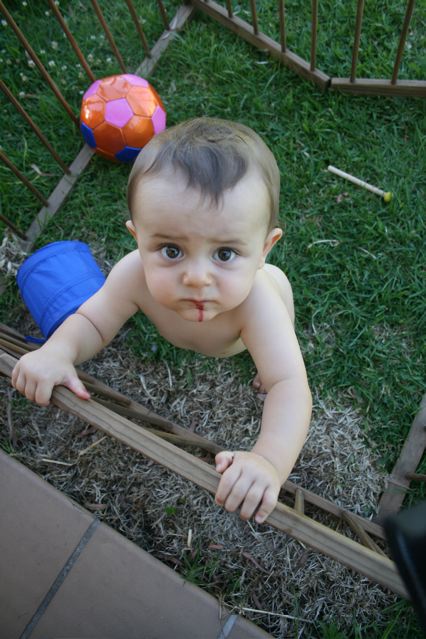 Apart from the nurse marking his gender as female, Inigo passed his 12 month check with flying colours. His length has slipped under the 50th percentile, weight is charging towards the 85th percentile (10.4kg), and head circumference is still comfortably above the 97th percentile, His head is about average for a 2 and a half year old.

And I’m deeply in love.

Yesterday, Bev & Ted took Inigo to a Climate Change protest, while Emily and I had knitty adventures involving much sangria, Kris, and a few notable cameos.

Inigo wore his first ever shoes. 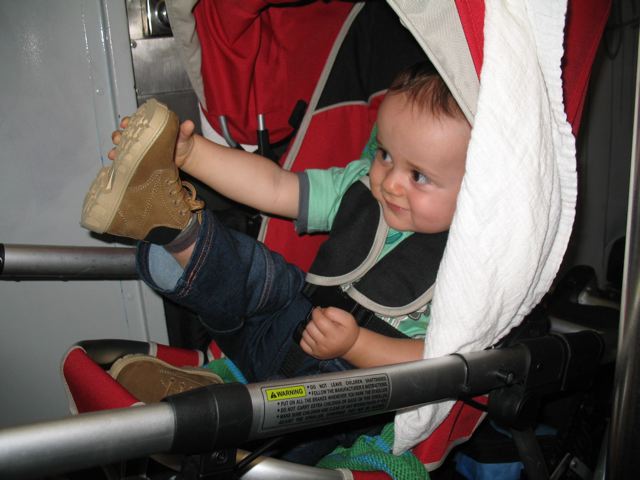 More protest pictures to come when Grandpa gets around to it. 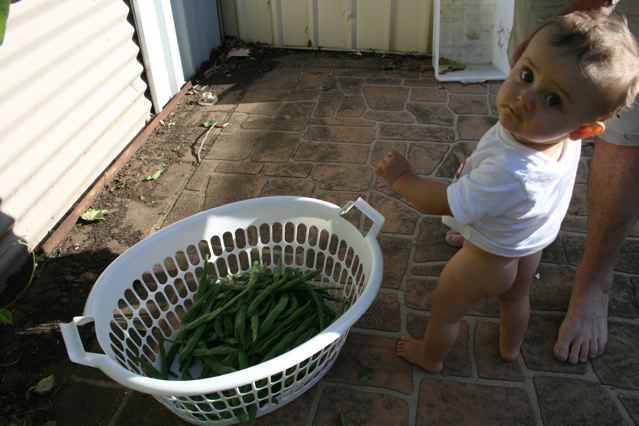 This is what we picked in just one day. Small naked child included for size comparison. We planted the scarlet runner beans last year so the chickens could have some shade in the hot summer months. These are also called seven year beans, because they die back in winter and come again for years and years. The harvest this year has been amazing, and it looks like we’ll be able to keep picking for some time to come.

My gorgeous sister in law, Kerry, has been working in Timor for a few months – organising a women’s conference for next year, for the Alola Foundation. While she’s been there, she’s been educating me about the day to day reality of life for women in East Timor.

The Alola Foundation works hard to end domestic violence, to improve maternal and child health, to boost educational outcomes for children, and to educate and support women to support themselves and their families.

East Timor has one of the highest mortality rates for women in childbirth anywhere in the world. Because of Portugese colonisation it’s a predominantly Catholic country, so birth control is practically unavailable. Timorese women have very high fertility, averaging ten pregnancies over a lifetime.

Although Timor has very high rates of breastfeeding, a comparatively low percentage of babies are exclusively breastfed until 6 months of age, and up to 2 years of age as per World Health Organisation Guidelines. Poor feeding practices contribute to high infant mortality.

Children in East Timor speak Tetun, the native language, and usually Bahasa Indonesia. Portuguese is the official national language that they will learn in school, and many also will learn some English. Kerry told me about a pre-school that she visited that has over 80 students in a house about the size of a small car.

If you have kids, and have some old books that they have grown out of, please consider donating them to this little school. Kerry will be in Australia for Christmas, and will be able to take some books back with her in January.

Because English is the 4th language for these kids, picture books with no words, or only a single word are useful. Books in reasonable condition would be appreciated, as they are going to be loved by a great many children. New books would also be appreciated.

And if you can’t send books, please consider making a donation here, to help women you will never meet lead a richer life.

Leave a comment and I will email you details of where to post the books, or I can arrange to collect them from you if you live in Sydney.