This morning was the Lorien spring fair. I had volunteered to help out the playgroup people with the bread baking activity, and Inigo and Mark painted a t-shirt, made a candle, and did some beading.

Then, Inigo stuck a bead in his ear…

And seven hours later, we got home from the hospital, with the sparkly red bead safely in a specimen jar. 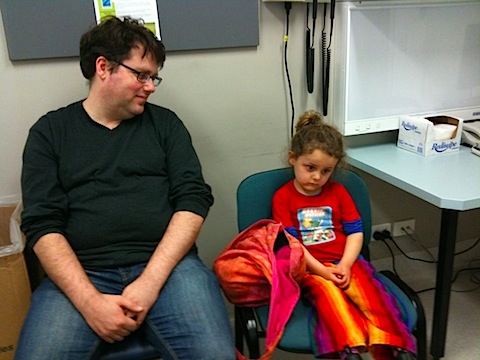 He was so super patient and awesome the the doctor at Westmead Children’s Hospital didn’t even need to give him nitrous while poking about in his head, and it was remarked that even much older kids had trouble keeping still. I pointed out to the doctor that he was the world’s most awesome kid, and thank you for noticing.

So instead of having friends over for a mah-jong night and drinking lads of red wine, we spent a million years in the hospital, feeling guilty for taking up time that could have been spent treating sick people.

But I have a lovely souvenir.

And the world’s best kid. Even if he occasionally sticks things in his ears. And it was shiny.