My friend David used to have a thing for Standard cars. He and his brother Andrew (my boyfriend for a while) shared a massive Standard Vanguard painted with Hammertone Grey that we all called Chubb. It was a fabulous way to arrive at a nightclub, but leaving could be difficult, what with having to crank the beast in the pouring rain, etc…

David and Andrew, but mainly David, used to work on cars a lot. It was David that taught me how to change the oil on my Ford Escort Panel Van, and gave me the confidence to know my way around a combustion engine so that no mechanic could ever baffle me with bullshit. And one day, David was pulling apart an airconditioning pump, and on his workbench I found a gorgeous captured bearing, or “thrust race”, covered in motor oil, which I proceeded to work over my hand and onto my wrist. I was a lot thinner then, and luckily David didn’t need to put the pump back together, so I kept wearing it.

Over the years I got fatter, and the bracelet became a permanent reminder of those days, one I wouldn’t dream of removing, even if I could.

Unfortunately, when Inigo was about 6 months old, the metal strip joining the two halves finally wore away, and the bearings all fell out, and my gorgeous bracelet was reduced to a torture device that cut into the flesh of my wrist and ached off and on.

On Saturday night, thanks to Richard, I finally had the means, the opportunity and the temporary fortitude provided by gin to remove it.

First attempt with the angle grinder.

The hacksaw wasn’t much use. 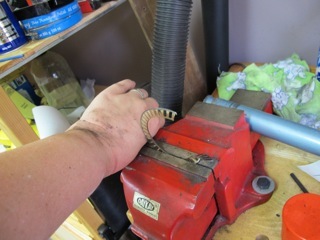 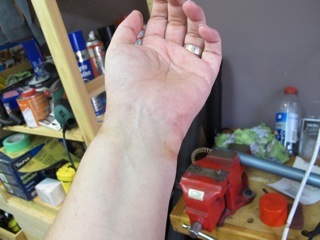 The aftermath. You can’t see it here, but I have an injury on the inside of my wrist, I am not sure if it is a cut from the vibrations, or a burn from the steel heating up, but it will heal soon, and my wrist feels so much better. FOr the first time ever I have been able to cuddle my boy without worrying about putting an eye out or hurting him.