Now that things with the child are somewhat more “normal”, you’d think I would have a bit more me time. But he has started solids, I seem to be spending a huge amount of time preparing food for the gaping hole that is his stomach. I would call it a black hole, except that output still equals input…

goes in, and I won’t talk about what comes out.

Frozen steamed pear, kiwi fruit and rockmelon. It looked so pretty, I just had to take a picture.

This was an empty box – he’s not allowed fruit juice yet!

Last night he had cauliflower for the first time, and ate quite a bit of it, as well as brown lentils mixed with pumpkin, and zucchini and broccoli. So far, he’ll eat anything I give him, and he shows more enthusiasm for new things after he has had them a few times. Unless they are sweet, in which case he will eat until he explodes. The new nickname is Mr Creosote.

And yesterday, we found a tooth!

Before Mark and I got married, I had a kitchen tea. But since we’d already been cohabiting for a while (and I’d had my own kitchen for years), we had no need for “stuff”. Instead, I asked friends to cook their favourite vegetarian dish, and bring me the recipe. We ate the yummy food, and Miriam put the recipes into a big folder for me to keep.

It was a gorgeous day, and I wish I had photos to show you now.

What I do have for you now is a superb recipe. I didn’t get around to cooking this until a few weeks ago, and I went through a period of mourning the years that I lived without this soup.

Jane learned the recipe from the monks at a Buddhist retreat that she went to when she was living in Brazil. Just what you need after a hard days meditation.

It’s easy (super, amazingly easy) to cook, and has such a wallop of deliciously distinctive flavour that you won’t be able to stop at one bowl.

Chuck first 4 ingredients in a pot. Simmer till lentils turn to mush. Blend with a bamix to make a smooth consistency.

Dry fry sesame seeds over a medium heat, stirring constantly to avoid burning. You want the seeds to change colour, but it doesn’t have to be a big colour change.

Grind sesame seeds and salt – to be proper authentic you’d do this in a big stone mortar and pestle, but my shoulder gave in and I did it in a food processor. It still tasted good.

Serve with a garnish of fresh chopped continental parsley if desired.

This recipe freezes well, and is thick and hearty enough for a meal on its own.

Scroll down past the reasonable use for an appalling craft for the knitting.

Last week, I went to a picnic with some other cloth nappy mums. They were all discussing sleep problems, and how each kid is worse than the last. I felt pretty left out – my child sleeps!

He’s been so amazingly, marvellously, wondrously calm, and happy to sleep (in his cot) when he gets tired. He sleeps in the car, he even sleeps in my arms when there isn’t a cot available. It’s been great for both of us (and Mark too!), and I feel like I deserve it. We’ve had enough grief.

I explained to the other mums about his new sleep habits, and about my magic solution. Antibiotics! It won’t work for everyone, but after all we’ve been through, I feel like having a baby without sleep issues is perfectly just and fair.

Then on Friday last week he stopped. We left him with mum and dad while we went out for dinner. I wanted to get him to sleep before we left, but after two hours of full body thrashing, screaming, fighting and kicking, I was at a loss. At first I thought it was just because he was in unfamiliar territory, but when he was still out of sorts the next day, I began to suspect that something else was going on.

He refused to sleep in his cot all weekend, and on Sunday he screamed all day. I was so wound up, when Daisy crapped in my bathroom, I lost it, and smacked him. I can’t really explain how bad this makes me feel, poor old Daisy is a bit senile, and I understand that he doesn’t know what he’s doing. And hitting an animal is never defensible. So you can tell that I was at a pretty low ebb when I hit out like that. Sleep deprivation destroys rational thought, and I think that having slept well for two months (since the antibiotics), going back to the bad old days was a bit of a shock to the system.

By monday, he was not sleeping until he screamed himself to exhaustion. I started to think we might be dealing with another infection. On sunday I refilled his antibiotic script. The last lot of antibiotics didn’t have a “Discard on” date sticker on them, and I just forgot. We got almost to the end of the bottle before Mark pointed out that they were probably out of date. So now he’s had the new lot of drugs for a few days, and last night he slept in his cot for the first time in almost a week. And all of us slept well. In fact, some of us slept so well, we were late for work 🙂

And now a little something for the afro fans out there… 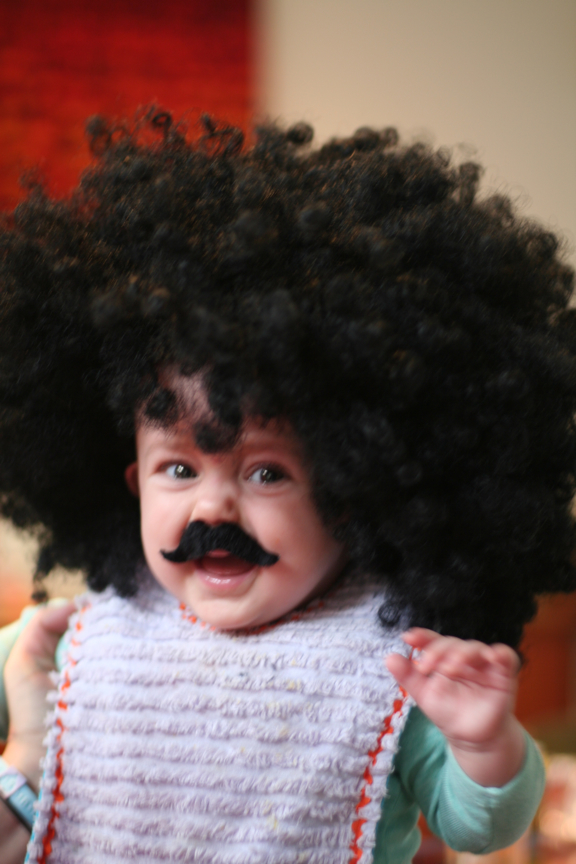 Thanks to Chris for the great pic!

I saw a pilgrim in lederhosen today. And the baby was cross, so I couldn’t stop the car to photograph this guy with his peeps outside the local mosque.

I tried to register as a pilgrim on the weekend. Apparently you need to not only be catholic, but you also need to be “known” to one of the recognised organisations. And Acceptance is not recognised. I am not actually a member of Acceptance either, but if I was going to claim kinship with any mob of catholics, these ones sound like my kind of catholics.

Yes, I am planning to hand out condoms on saturday, and I feel quite strongly about the evil of the pope’s stance on their use in Africa, despite the spread of HIV/AIDS. I believe in women’s reproductive rights, and I am a big fan of homosexuality.

So why would I try to sign up to World Youth Day? I gotta get me one of those stylin’ backpacks!

God I am shallow.

Just in case my my stance was ambiguous.
Happy Birthday to Meeee!
Is that a duck or a rabbit? Why not both? #mothersday
Smug, self satisfied pizza box echoes my mood so eloquently.