On friday night, we went to a party to farewell Kerry. Inigo was a trouper, and hardly whinged all night, despite the loud band and people everywhere. He even had a little nap, in his pram which was parked right beside the band.

I got to meet Bob Brown, and asked him for a picture with Inigo. There was no baby kissing – but I think this will make a great picture for Inigo’s baby book! 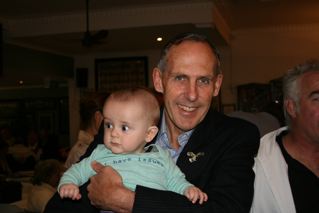 The t-shirt reads “I have issues”

There has been rather a lot on in the last few weeks, and I have a cold, so it’s been hard to keep up the blog. I hope to add another post soon with pictures of Owen Edward, who arrived on Sunday. Hopefully his mum is starting to feel better after his birth – he was more than 10 pounds!

Kerry had her last days in the Senate last week, and we went to Canberra to see her last speech.

Inigo chews a toy as the wheels of government turn

I had never been to new Parliament House before, and I had never been to a Senators office before either. We got “unaccompanied visitor” passes, which meant we could wander the halls without an escort. One security guard asked if he could feel inside the pram (since it was too big to go through the metal detectors on the way in), and I asked him to let me know if it was wet. I wish I had a photo of the face he made! 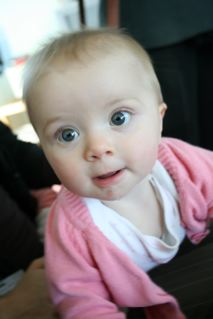 One of her youngest fans? 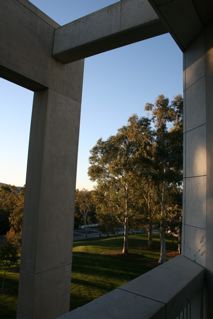 The view from a staff lunch room, where we had a we drop to celebrate after Kerry’s (not valedictory) speech

Watching Natasha Stott-Despoja’s Valedictory speech on the tele in Kerry’s office. Don’t worry about the spots on the back of his head – he is either part vidiian, or they are stork marks (a non permanent type of birth mark) and will disappear in a year or so. 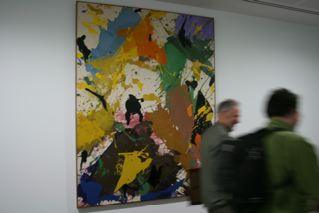 Mark and Ted walk past a painting by Sid Ball – George also had one of his works, which I think is better than the one in Parliament House.

The kid looks happy in the big chair

I’ve been designing (in my head) a follow up to the Myrtle Scarf – but not doing much knitting. Knitting has consisted of more booties, one pair from the gorgeous watermelon yarn that Bex dyed for me ages ago, and an orange pair now on the needles to “match” his purple corduroy pants that I made.

Here are a few pics I took of Myrtle before she went to her forever home, hopefully illustrating the beautiful sheen and stitch definition of the yarn, and the lovely drape of the finished scarf. Unfortunately the photography is nothing special – I was literally running out the door as soon as I took the blocking pins out.

And here is a picture of the sprog in his February Baby Sweater by Bex. 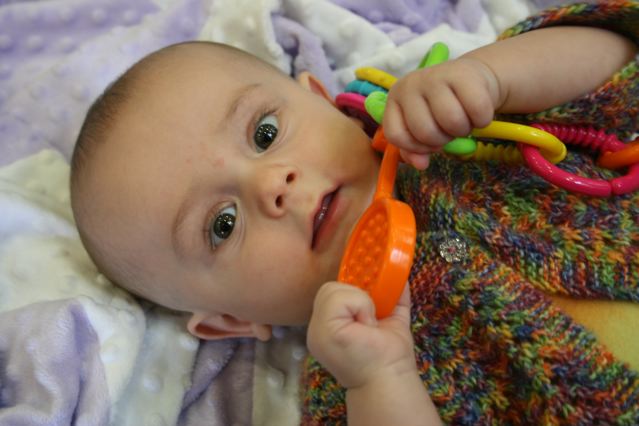 We had the MCU on the 16th, and saw the Dr to get the results. Apparently he has grade one reflux on the right, and grade two on the left. Grade one is no big deal, and probably not worth medicating on it’s own – but grade two is not good.

We did another urine test on the 16th, but so far we haven’t found the results. I have made numerous phone calls, but since my paed has two offices and two receptionists, and she has been away at a conference for a week, it’s been hard to pin anyone down. I will go to the Westmead office tomorrow, and if the results can’t be found then we’ll re-test.

Last Tuesday night Mark noticed that the tip of his foreskin was looking a little manky, so off we trooped to the medical centre (the skanky one I hate, but is open late). He weighed in at 7.9kg, and we got oral and topical antibiotics for the infection. Apparently it was probably caused by the MCU, not poor parental hygiene. So if he did have another urine infection on the 16th, this latest round of drugs would have killed it by now – but it would be helpful to know if he did get another infection while he was on the prophylactic dose of the antibiotics.

He continues to go from strength to strength, he started sitting up unsupported over a week ago, and has begun to “crawl”. Backwards. 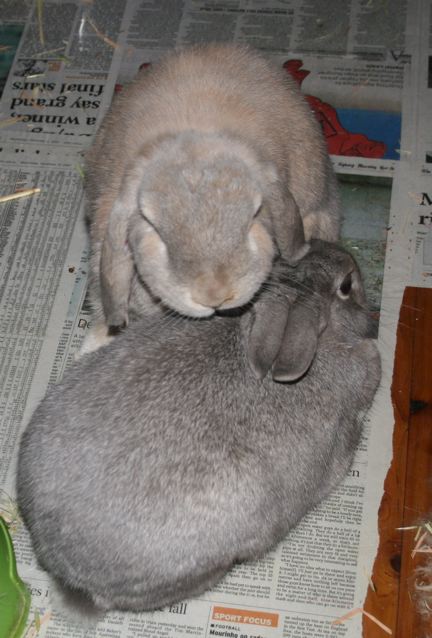 Many months ago, Blueberry and Monkey went to live with our friend Dionne, and her bunny Jasper came to live with us. Jasper is a lovely girl who had lost her bonded partner, Harrison. Jasper and Harrison were deeply in love, and when he died, she was all at sea. Dionne and I thought that she might be a good match with Custard, who was also alone after the untimely demise of Grasshopper. Since Grasshopper died after Custard attacked him, I was understandably reticent about leaving these two alone together prematurely, and all of our early bonding attempts ended in growling, lunging, and eventually biting. We took things very slowly – perhaps too slowly.

But for a few weeks now, they have been living in domestic bliss. Jasper adores her new man, and sometimes he even deigns to groom her for a second or two.

Rabbits are social creatures, and really thrive in the company of their own species. A human companion is well and good, but there is nothing like bunny love.

Happy Birthday to Meeee!
Is that a duck or a rabbit? Why not both? #mothersday
Smug, self satisfied pizza box echoes my mood so eloquently.
The day is looking up. Just booked in a fourth school for Kids Role Playing, and I have this guy, and this lunch...
Success!
It’s not the same without Engy, but I hope to do her proud.